I saw something today that peaked my interest.

While waiting in line for brunch this morning, I noticed a man ahead of me wearing a very stylized t-shirt that had “Abbott”, “Hastings”, a couple of other street names, as well as “DTES” printed in a large Helvetica-type font.

I did some poking around the internet and found out that the t-shirts are made by a local designer called Sharks and Hammers, and sold by an art and design store on Main street called Vancouver Special. There is also a line of “Eastvan” shirts that were worn by Vancouver band, the Japandroids, while performing on Jimmy Fallon in January. 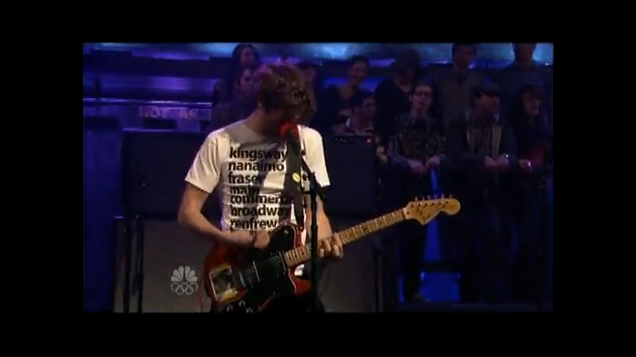 Of course, the particular Vancouver locations on the shirt I saw today hold a number of social connotations, and in some cases, stigma. It made me wonder what the producer’s and consumer’s intents were in designing and wearing a shirt that in essence, succinctly contained many of Vancouver’s most pressing social issues.

Was it a social commentary? An ironic statement of some sort? Or simply thoughtless consumerism? (Much like those ubiquitous Che and Mao t-shirts). It reminded me a bit of Andy Warhol’s artistic commentary on the commodification of people such as Marilyn Monroe and Elvis Presley in Western society in the fifties and sixties. In both cases, the seemingly intangible essence of a person or place is concentrated into mass-reproducible, consumable form.

Is it appropriate to use the DTES as a fashion statement? I’m not sure. To me, it seemed rather distasteful-a disregard for the actual nature of the problems and issues that our city faces. On the other hand, fashion is also art and can thus serve as social commentary. Perhaps the purpose of producing DTES shirts is to raise awareness and provoke thought in the portion of society that can afford to purchase designer shirts, which would make the designers rather subversive and cheeky!

Sarah Andersen is both a wave and a particle.

12 Responses to “Is the DTES trendy?”