The gulls were bored. They’d had a busy day, but now they had nothing to do. They milled around aimlessly.

The heron had been fishing in the murkier areas of the river, and needed a wash.

He flew over to join the gulls. 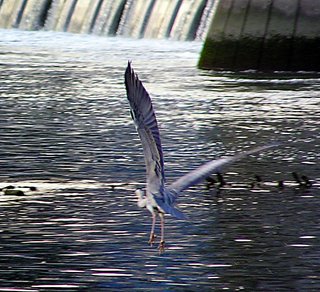 When they saw him coming the gulls whispered excitedly to each other, but I couldn’t hear what they were saying.

The heron landed and looked at the gulls, who looked back.

“Why are you all looking at me like that?” asked the heron.

“Right!” chorused the others. There were muffled giggles in the back.

“Idiots,” said the heron. “There’s nothing to admire. I’m all grubby.”

He began to wash.

The heron looked up, and some of the gulls in the middle stopped so suddenly they bumped into each other.

“What are you doing?” asked the heron.

“Nothing!” said one of the gulls. “You didn’t see anything, did you?”

“No, we haven’t,” said the gull. “We were just, you know, adjusting our positions. Washing. Stretching our wings, stuff like that.”

The heron glared, and they looked back innocently. He went back to his washing. “Something funny’s going on,” he muttered to himself.

One of the gulls flew forward and landed right in front of the heron.

Another two quickly moved closer as well. The heron looked up sharply.

“WHAT?” he demanded. “YOU’RE STILL STARING!”

“Nothing!” said the gull at the front. “Er, we’re just watching, and learning how to wash properly. You’re VERY good at it.”

“I don’t believe you,” said the heron. “You MOVED again. You weren’t here before!”

“No, you weren’t!” said the heron, but he sounded a little uncertain. “Were you?”

I heard a voice beside me. 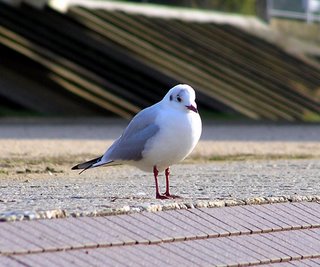 “Too late to join in the game,” said the gull. “He’s going to catch on in a minute, and I’ve missed all the fun. Grandmother’s Footsteps is always MUCH more interesting when ‘Grandmother’ doesn’t know you’re playing.”

Bad Aunt is the pseudonym of a New Zealander living in Japan, working as an English language teacher in Japanese universities. During semester her main stress relief comes from blogging about work and the many and various idiocies of the Japanese tertiary education system (hence the pseudonym). During her last vacation, armed with a halfway decent new digital camera with a good zoom she rapidly discovered that she will never be a professional photographer, so had to find another way to get people to look at her photos. With this in mind she ran a series of photo essays about the secret life of birds.